Last year we came back up the coast of northern France with a few hours to spare before the dash for Eurotunnel and stopped off at the British military cemetery at Terlincthun. We have visited these on occasion and paid our respects to British and Maori war dead in Tunisia and to British, Germans and Sikhs in France, among others. As we looked round, I mentioned to my husband that my great-uncle was buried in a war grave somewhere in the area.

On our return, I looked up the details and found I had been standing one row behind Leonard, my relative, and not known it. As we were in France again this summer, I decided to go again and find the grave, in a way, doing it on behalf of the family as my uncle had been doing some family history and discovered Leonard’s fate.

This was the War Graves Commission commemoration I had found to be available; I was quite touched by the care taken,  the attempt to continue to provide information and the simple commemorative certificate that can be generated on their site.

The Commission takes its role seriously and the cemeteries are always impeccably tended. The information about grave location is available with plans such as this…. Leonard is in IV B, grave 11, should you ever be passing Wimille…

A lot more information was available than when I had last looked online, and I had found the record of the headstone order with the inscription his poor parents, William and Elizabeth had chosen, his medal card showing the British and Victory medals – little consolation to the family but at least a recognition. 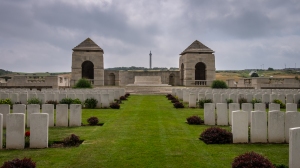 Terlincthun, looking towards the Colonne 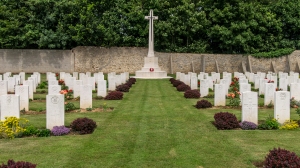 Leonard’s last resting place is close to the Colonne de la Grande Armée – you can see the column here, directly opposite the cemetery. (Leonard’s grave is just to the left in the shot immediately above.)

I took some flowers on behalf of the family: a foolish gesture perhaps, but it felt right. We aren’t usually a family for marking anniversaries in this way, or spending a lot of time at gravesides; we would rather recall the people in their normal milieu, but we didn’t know Leonard, and somehow it seemed a mark of respect for this lost 19-year-old boy.

I pay my respects

We spent some time ‘meeting the neighbours’ too, Australian, German, British, officers and other ranks, all equal in death. There were those who had no name too.

Since returning, I have tried to find out a little more about this young man. I knew he was deemed to have died of wounds (gas) but no more. I tracked down the digitised battalion diary recently and ploughed through it to find that Leonard was listed in the wounded on 5th September 1918 and found the notification of his death on the 20th. I can’t imagine what he went through for that fortnight where he clung on to life, or how much of a relief it might have been for him to slip away finally.

What I don’t yet know is more about the action in which he was injured. I found this map from around the relevant time, but have yet to track down any further information. The battalion diary appears to have become a list of casualties rather than of action, though I may not yet have found the relevant sections. As we never had chance to know our relative, I feel I would at least like to know a little about his last days. 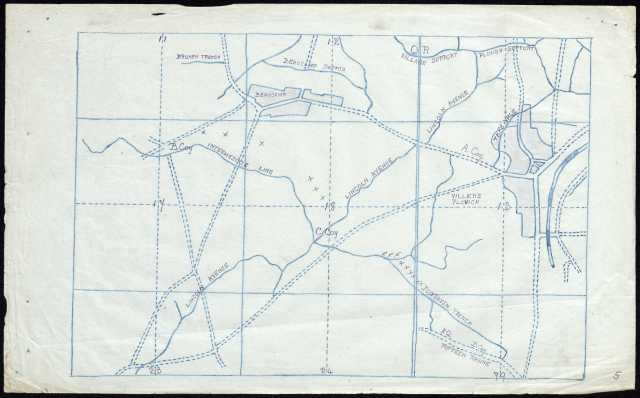 At 19, the age at which you died, Leonard, I was at university, enjoying life and for me at that age, a crisis meant an essay not completed or a drama with a boyfriend.  The contrast is stark.

May the gentle earth lie lightly upon you, Leonard.

This entry was posted in History, People and tagged family, history, WW1. Bookmark the permalink.

5 Responses to In Memoriam