Ravenna in Droitwich: a Hidden Gem

Earlier this week David Holden led a fascinating guided tour round the Sacred Heart church as part of the DAN Arts Week in Droitwich. He talked about the story of the church and its wonderful Venetian glass mosaics, which include as a major feature the life story of our local Saint Richard de Wych. The church was opened in  1921 and the mosaics executed over the following decade or so.

A plain exterior – a Roman basilica

A pipit… by Gabriel Pippet.

Although we only live round the corner from the church and have been many times, we learned lots of new facts and features about the church and the artists. I have tried to photograph the mosaics a couple of times, but it’s hard to do them justice. Pippet also carved the beautiful capitals, altar and the (wooden) stations of the cross.

A real highlight of the evening was the chance to see the some of the original cartoons by the Solihull-born designer, artist and sculptor Gabriel Pippet, which were then so skilfully interpreted by mosaicists Maurice Josey and Fred Oates. Josey had worked on the Westminster Cathedral mosaics prior to this commission. 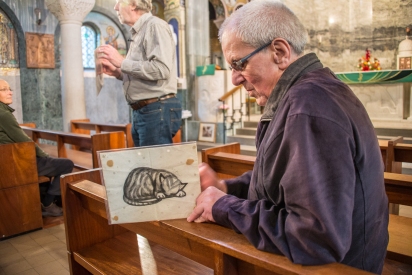 …and puss in situ – at the Annunciation!

David with a cartoon of a cardinal’s hat

The hat in situ.. but with a bishop. Discover the story when you visit…

It is startling to realise how many local people do not realise this amazing art work is there. The fairly plain exterior of the church, which is modelled on a Roman basilica, doesn’t  give much away… Do go and see for yourself if you’ve not been. The Ravenna-style mosaics are a delight: here’s a slide show to give you a little taste of what awaits you…

The church is generally open during daylight hours.

3 Responses to Ravenna in Droitwich: a Hidden Gem