Random Acts of Kindness in the Great Wen

Earlier this week our photographic group of four took a photo-trip to London, combining this with taking a look at the exhibition Strength for Life at St Martin-in-the-Fields as Pam, one of our number, had a winning portrait on show.

Memories of Rajasthan by Pam Turner

This achieved, we headed off past the church courtyard, taking pictures as we went. We were concentrating on street photography. Stewart and I are mere hobbits from the Shire, and mercifully unused to life in the big city since stopping work.  I know enough, though, not to anticipate much interaction with people as we wandered the streets, given the recent sarcastic reactions to some poor misguided soul’s attempt to launch Tube Chat badges and my own past experience of London.  My assumptions were about to be tested.

Just behind the courtyard is Maggi Hambling’s sculpture A Conversation with Oscar Wilde, and I grabbed a shot of this with a Big Issue seller who was standing chatting with another man behind ‘Oscar’. As I took this shot (and some of the others were also busy snapping) I saw him look across at us. 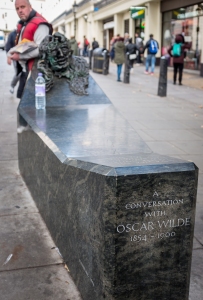 I wondered if he was about to object to the photography, as some people do, and on occasion quite agressively, but he just looked over at us, then at the water bottle perched on the sculpture and said: “That’s not mine, someone’s left it here. You won’t be wanting that in your shots, will you?” He then kindly picked it up, tucked it out of sight and promptly returned to his conversation with another chap.

Back to the other conversation

Thank you again for your thoughtful act.

We then nipped into the nearest McD’s, gourmets that we are, for some sustenance and I went to hold the only tables that would take the four of us together, while the others queued for food.

At the next table were two young men, the one, I think perhaps central European, from the accent. I checked with them that the tables were in fact free, and the young man opposite said yes. As he did so, he reached across to move the food bags and general debris left by the previous people on to the table between us, to get it out of my way as I deposited bags, camera and stick. We started to chat, as he was interested in the retro-styled Fuji I’d popped on to the table.

As the others were heading over then, I started to gather up the rubbish he’d already kindly moved, intending to pop it into the bag and take it away, only for him to stop me, gather it up himself, take it to the bin and even come back with a serviette and wipe over the table.

The others joined us, we chatted very briefly, and the two young men went on their way, without my being quick enough to ask for or grab a photo. Thank you for your thoughtful act, whoever you are, young man in McDonald’s on Monday!

Our long afternoon in Camden was very fruitful – more of that another time, photographically speaking. Husband and I parted company from the other two in the early evening, as we were heading back via different stations. Being diabetic, Stew needed something reasonably substantial  despite the earlier burgery delight and had to eat before we left London as he was due for a fasting blood test the next day, but not until quite late. I found, rather randomly via Google, a Spanish restaurant not too far from Euston, and we hailed a cab to get there in good time. 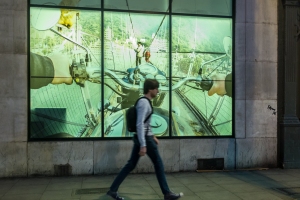 We hit a diversion, and as we got near, the cabbie seemed a bit hesitant; I confirmed the address to him, and after a short hunt he admitted he couldn’t find the restaurant. I said not to worry, as it was a random pick, and to just find somewhere suitable to set us down where we could get a bite; as I said it, I saw a tapas bar and restaurant and said there would do fine. I passed notes over for the fare, almost £13 by now, only to have the proffered money refused on the grounds he hadn’t taken us where we wanted!

I said to take a tenner, then, but he just waved us off very kindly and wished us a pleasant evening. At this point, I was so taken aback, I half expected to find we were in totally the wrong area of London as he was so apologetic – but not so! I was also too bemused and tired to think to get our cab’s number, so this thank you is also not going to reach the recipient,, but nonetheless I say:-

Thank you,  Mr Cabbie,  for an act of warmth,  very contrary to the negative caricature image of the London cab driver: the human value of the kindness far surpasses its monetary value.

We went into Providores tapas bar, as it turned out to be, and had an excellent meal before heading back to Euston and onward to Worcestershire, basking in a glow of pleasure from a lovely day with friends, masses of enjoyable street photography, a tasty supper, and the added highlights of three very sweet and random acts of kindness from total strangers.

Thank you all  four gentlemen (I completely forgot to mention the kind hoodie-clad lad on the train who gave me his seat, apologies!), for restoring an often shaken faith in human nature and incidentally, confounding the stereotype of the uncaring London urbanite. I did thank you on the day, and I know you won’t actually read this, so my real thanks now must be to pass on the kindnesses to others in future. I promise I will do so, and exhort anyone who does read this to do the same – please ‘pay it forward’ by doing small acts of kindness that can have impact beyond your anticipation.