A Taste of Eritrea 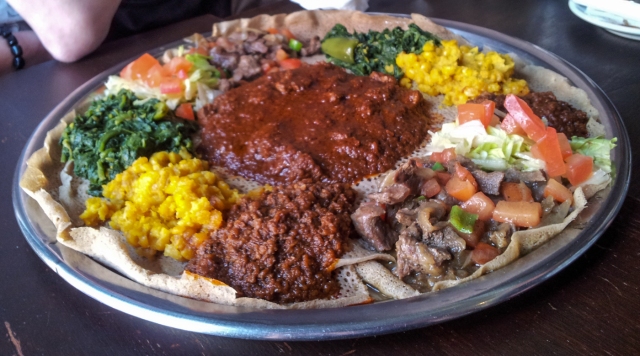 A friend took us to Mosob, an Eritrean restaurant in London the other day. It proved to be more of a tutorial than a simple lunch, and all the more enjoyable for that! It is a family-run business, and they seem to take genuine pleasure in introducing newbies to the traditions and tastes of Eritrea. We were inclined to go for the beginners’ option of a set meal for two, and it was suggested we pick an additional main course as we were three, which we did.

Eating is a communal activity, hence the generous platter that arrived, topped off with a woven grass cover which was whipped off with a flourish to reveal this colourful assortment; split peas, spinach, spicy mince, lamb & onions and a rich lamb stew (centre) which was the star of the show for all of us.

The meat and vegetable dishes are portioned out onto injera, a sourdough bread which appears like a cross between a crumpet and a pancake. Additional rolls of injera are provided for scooping up the food, an art in itself, but guidance is provided!

We had a nice selection of African beers between us, though I discovered on asking that the traditional accompaniment would be mies, a sort of mead, which was a bit surprising.

We didn’t pour with quite as much flair as the professionals!

We decided on Bunne, the ‘coffee ceremony’ that was offered, in lieu of dessert, and it did indeed amount to a ceremony.

A small pan of roasting coffee beans was brought to the table for us to gently waft the aroma towards us to whet the appetite. A little later, this unusual-looking pot of coffee (jebena)  was brought and the coffee deftly poured from a height into the little cups, without stopping. Two more rounds of coffee remained, and less traditionally but practically, we were left to pour these ourselves.  Reading up since, I discovered that transformation of the spirit is said to take place during the coffee ceremony through the completion of the three rounds, and the last is ‘bereka’ or blessed. A burner of frankincense was brought with the coffee, providing an exotic tang, and a generous bowl of slightly salty popcorn which husband and friend happily polished off to the last kernel!

The traditional ‘filter’ in the neck of the jebena would be horsehair, but we were told that this horrified vegetarian customers, so an acceptable substitute has been sought and found!  (There is a good selection of vegetarian and vegan options, incidentally, including the tasty starters we had.)

As we had to get back to the Midlands, the coffee ceremony was perhaps less leisurely than is traditional, but none the less successful. We felt restored by the whole experience! The owners were friendly, helpful and hospitable. The experience also left me wanting to find out more about the country and culture, about which I knew nothing but a few basics, and that has to be a good thing. Perhaps these few words have encouraged you too to find out more….?